So I totally blanked on taking pictures of my last project so I could share it, mea culpa. Instead, I figured I'd write a post on all the different ways you can sew a pouch.

One of my favorite pouch patterns is Butterick B5371, which is actually a collection of patterns, some of which are for belt pouches. I like these because they are lined and have a quasi-historical feel to them.

The pattern on the right requires double sided fusible interfacing, but I've never been able to make that look good. So I usually opt for bias binding instead.

This one, however, is my favorite. You can't quite see it, but the lacing is done through grommets, and I absolutely love grommets and eyelets. I have about a thousand of them in my notions box at home, and two separate attachment tools (one looks like a pair of pliers, the other is a simple rod setting that requires the grommet to be hammered in). I've also found that a nice touch is to add a patch or applique to the top flap.

The image below is from Simplicity 5320, which is the pattern I used to make my most recent pouch. 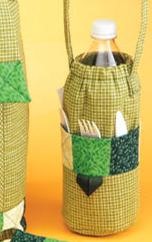 The pattern assumes you'll be using fat quarters or similar lightweight fabric, but I used suedecloth instead. Because my fabric was heavier than what they thought I would be using, I cut out the need for fusible fleece, and it turned out pretty good. I also lined it with some leftover gold silk instead of just doubling up on the fashion fabric for the lining. The most challenging part for me was sewing the bottom - it combined my two weakest skills, sewing in circles and sewing a gusset. One day, I'll figure out a good way to sew a circular seam (any ideas, readers? Please, leave a comment below and I will thank you with every curved seam I sew forever after!)

Since the recipient was male, I also cut out the shoulder strap, since I wanted to avoid a 'purse' look. Instead, I just made the drawstring cord longer so it could be easily tied to a belt.

And of course, there is always the basic drawstring bag. I'll post a tutorial soon on my favorite way to sew a drawstring bag, since they are so versatile and easy to make. I'm also attending a costume event for which I'll need some 1920s attire, and I'll also make sure to post what I put together for that.

Want to master Microsoft Excel and take your work-from-home job prospects to the next level? Jump-start your career with our Premium A-to-Z Microsoft Excel Training Bundle from the new Gadget Hacks Shop and get lifetime access to more than 40 hours of Basic to Advanced instruction on functions, formula, tools, and more.

Other worthwhile deals to check out:

Join the Next Reality AR Community

Get the latest in AR — delivered straight to your inbox.